Once upon a time, political giants roamed the halls of the nation’s unfinished Capitol.  Their expansive vision and powerful oratory was equalled only by the magnitude of the challenge foisted upon them by a brutal civil war and the bold aspirations they held for a new, more perfect Union that they sought to establish at its conclusion.  These were the senators and representatives that sat in in Congress in Washington, DC between 1860-1865.

Fergus Bordewich makes it unequivocally clear that the story he has to tell in his deeply researched, eloquently written, study of their work is no fairy tale.  Rather, it is “a political history of how Congress fought that war.” What it is not, he warns, is “a book about politics in the abstract, but about the men who practiced it in the chambers of the wartime Capitol.”  It is a challenging undertaking, readily accepted by an experienced historian whose skill is worthy of the men and events he seeks to understand and recount.

Even with the elected representatives from the seceding states no longer at their desks, Congress remained a gathering of outsized personalities.  Bordewich has adroitly chosen to organize his narrative around four of them: Radical Republican Senator Benjamin Wade of Ohio; moderate Republican Senator William Pitt Fessenden of Maine; Radical Republican Representative Thaddeus Stevens of Pennsylvania; and pro-slavery Democratic Representative Clement Vallandigham of Ohio.  Through them, and with a nod to other notable Congressional personages, Bordewich documents the essential role Congress played in winning the war and imprinting permanent changes on the American nation that emerged from it. 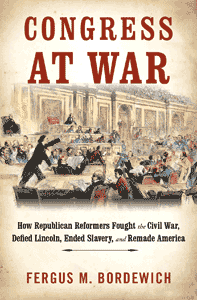 Even with Republicans having a two-to-one majority over Democrats in both the House and Senate, Bordewich disposes of the notion that Congress worked in lockstep with President Lincoln on the aims and conduct of the war.  Questions about Lincoln suspending habeas corpus and the role slavery would play in the Union’s war aims fueled Democratic opposition and troubled many Republican consciences.  “Entangled with the argument over the war’s ultimate purpose were the stubborn questions of how it was to be fought and who — Congress or the president — possessed the paramount constitutional authority to wage it,” writes Bordewich.  “Consensus,” he concludes, “remained elusive.”
Also bedeviling Congress from the earliest days of the conflict was a workable strategy to amass sufficient financial resources, and a disbursement mechanism, to pay the immense costs involved with keeping a huge army in the field.  Soldiers needed to be paid, fed, armed, and clothed.  Wagons, ships, horses, and all manner of war materials had to be bought and dispersed in unprecedented quantities.  All the country’s banks held just under $100 million in specie, a pittance necessary even under the most conservative estimates, and a quarter of that was in vaults in the seceded states.  “The Union’s financial machinery was primitive,” Bordewich observes, “No system of national taxation existed.  There was no national bank or system for raising large sums of money.”  By the summer of 1861, “financing for the war had reached a crisis.”  The monumental task of finding a solution to the problem fell to Stevens and Fessenden.  Along with Treasury Secretary Salmon P. Chase, they concluded “that a combination of massive loans, increased tariffs, and taxes — including an income tax — would be necessary to raise the sums needed.”
Financial solutions, once found, had to be translated into military success in the field.  “If the North was to prevail on the battlefield,” Bordewich deduces, “Wade, Stevens, Fessenden, and other like-minded men believed, it would require steel-spirited leadership, creative politics, moral courage, and a racial revolution that up to now only a few members had dared to contemplate.”  When Congress reconvened on December 2, 1861, after its summer recess, Bordewich explains, it opened “with a cascade of wide-ranging proposals that would begin to prepare the nation for the ultimate destruction of slavery, aggressively insert Congress into the waging of the war, permanently transform federal monetary policy, and shape the westward expansion of the country’s development.”  Bordewich’s analysis makes clear that a second American Revolution was in the offing.
By the spring of 1862, the war had become bloodier than even the most pessimistic politicians had anticipated.  Congress found itself in the midst of debating passage of a colossal tax bill to finance this increasingly expensive and unexpectedly protracted war.  Nevertheless, the Senate also found time to consider a quartet of interrelated bills “which were among the most transformative measures ever to appear on the floor of Congress.”  They were the Homestead Act, the Pacific Railway Act, the Morrill Land-Grant College Act, and the creation of the Department of Agriculture.  All four bills passed by wide margins and Bordewich rightly concludes that they “demonstrated the gathering Republican commitment to a broad new concept of the public interest, as well as a long-term vision for the nation’s future.”  By the time the president pro tem of the Senate brought down his gavel on July 17, 1862, the accomplishments of the first session of the 37th Congress were indeed unprecedented.
No issue would impact the nation’s future more than the question of slavery and the prospect of emancipating four million African Americans.  Bordewich concedes that “Lincoln’s announcement of the Emancipation Proclamation was a bold political stroke” but, he contends, “it had only been made possible as a result of the many months of debate in the House and Senate, and the ceaseless personal prodding of the Radicals in Congress.”  The passage of The Second Confiscation and Militia Act in July 1862 had laid the groundwork for recruiting and enlisting black men into the Union Army.  African Americans, most of them former slaves, would eventually comprise ten percent of Union soldiers and play a critical role in the Union’s eventual victory.  “No wartime issue was more emotive and politically fraught,” Bordewich contends, “because the enlistment of blacks threatened to place Negroes on an equal plane with white men for the first time.”
These bold moves would be reflected in the mid-term elections beginning in October 1862.  Nationally, the Democrats gained seats in the House even though Vallandigham was defeated.  While the Republicans gained five seats in the Senate, the Democrats, nevertheless, declared victory.  Bordewich concludes “The voters had delivered a clear and unmistakable message: either deliver victories or end the war.”  A resounding Union defeat at Fredericksburg in December 1862 led many congressional Republicans to seriously consider a power grab that would remove Secretary of State William Seward, dump Lincoln as the party’s 1864 candidate, and replace him on the ticket with Fessenden.  Lincoln decisively quashed the ill-conceived rebellion but, Bordewich believes, “It was a harbinger of troubles to come for the president, however.”
Bordewich’s “Epilogue” hints at the important work Congress left unfinished after the assassination of Abraham Lincoln and the ending of the Civil War.  But in assessing the legacy of the Congresses at that time, Bordewich rightfully concludes that “The amount of legislation they enacted during the Civil War was prodigious in volume and transformative in its effects.”  He acknowledges their success was all the more remarkable “for a party that had never held national power before, and that in 1861, was faced with managing a war that few Republicans expected to have to fight.”  It is hard to argue with Bordewich’s assessment that their success “was one of the greatest political achievements in American history.”

Hopefully Bordewich has husbanded sufficient energy to undertake a similar investigation of Congress’s role in the post-war world of the impeachment proceedings against President Andrew Johnson, the struggle with Johnson over the scope and management of Reconstruction, and the debates over ratification of the 13th, 14th, and 15th Constitutional amendments. The ghosts of those long dead legislative giants who haunt the corridors of power in a now finished Capitol have again been given new life in Bordewich’s impressive chronicle.  They deserve a chronicler with the energy and insights Fergus Bordewich brings to all his historical pursuits.

The Round Table invites you to submit reviews or interviews for publication on this site. Please send an electronic copy of any materials you would like considered to admin@cwrtdc.org. Please include a short biography, if you would like it added at the end of the post.